Gayle Weathers and Controlling the Narrative of ‘Scream’ 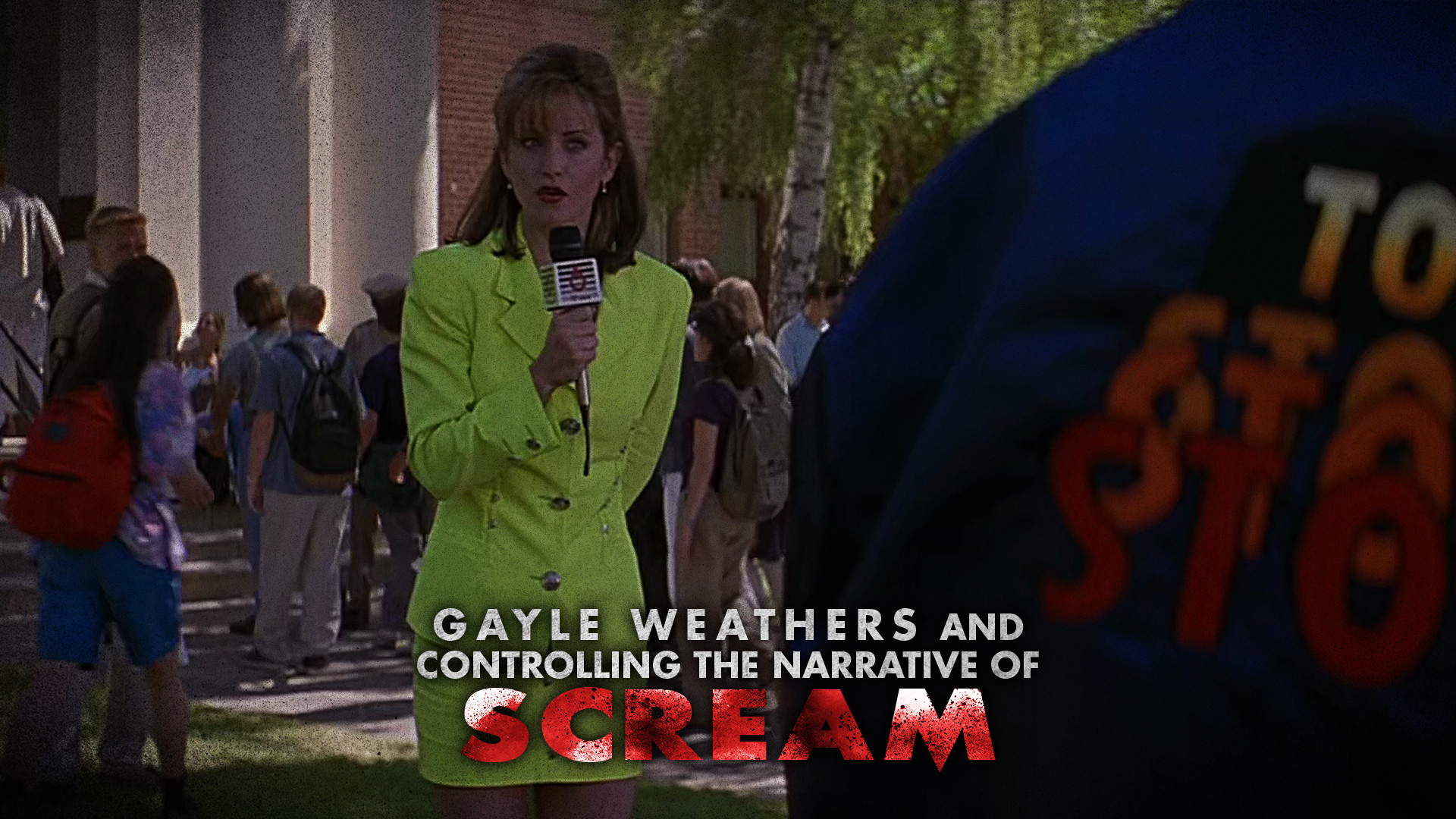 Since its release in 1996, Wes Craven's Scream has become synonymous with the Slasher sub-genre revival for its satirical take on horror and youth culture. Although none of the sequels have matched the critical and commercial success of the original, the franchise as a whole has forged an identity around its use of meta-humor and meta-narratives that both criticizes and exemplifies the ever-growing postmodern state of reality and unpalatable truth.

While the self-aware commentary is often reserved for the younger cast of characters, such as film geek Randy Meeks (Jamie Kennedy), Gale Weathers (Courtney Cox) remains an understated piece in this more extensive form of storytelling. So much so that it hits a point of immense irony: Gale Weathers, as a reporter, makes a living in storytelling of many forms.

Weathers is initially introduced in sporadic and short appearances, presented as a hard-driven reporter that restlessly strives to lead the narrative and media conversation. It's not until Billy Loomis's arrest that her relationship with Sidney Prescott (Neve Campbell) is revealed. A year before the killings, Weathers covered the murder trial of Sidney's mother, asserting her own theories and belief in the innocence of Cotton Weary (Liev Schrieber), who was eventually convicted of the charge. Weathers proceeds to publish a book based on the case and these theories.

As Gale argues to Sidney, "Your mother's murder was last year's hottest court case. Someone was going to write a book on it." The statement immediately recognizes the insurmountable popularity of the true crime genre, even today. Gale's opportunistic drive to profit from the public's fascination consequently inserts herself into the narrative through her own control of media. Although the book is initially sold on its merits of nostalgia and hypotheticals, the emerging prospect of saving "a man's life" (Cotton Weary) — after theorizing a connection between the past and present murders — places Weathers at the forefront of the event.

Meanwhile, the killing spree of local teenagers Billy Loomis (Skeet Ulrich) and Stu Macher (Matthew Lillard) can also be sourced from similar motivations. In her book, Technology, Monstrosity, and Reproduction in 21st Century Horror, Kimberly Jackson states that by "[e]mulating killers from horror films, their aim is to fuse reality and representation." In other words, the actions of Loomis and Macher in Scream's diegetic reality follow a fiction that produces a new mythos around their actions and their existence. Though the inherent motivations differ, Weather's own path to fame and wealth has the same result.

Naturally, their paths are less than parallel to each other. In Scream's climax, Weathers is instrumental in putting an end to the massacre conducted by Billy Loomis, shooting and wounding him gravely before Sidney kills him upon his sudden revival. By doing so, Gale relinquishes control of the narrative to Billy, whose death births a copycat-martyrdom throughout the rest of the series. Billy has become revered and fictionalized in a new mythos.

Gale Weathers continues to feed this mythos with her novel "The Woodsboro Murders," a sensationalized account of the first film's events through Weather's perspective. Before the events in Scream 2, Gale has sold the film rights to the novel, and the in-universe movie "Stab" is premiered in the opening sequence. By selling her story's rights, Gale inadvertently crumbles the boundaries between her reality and her fictional self in the broader media. Unlike the series' film geeks, who self-consciously reflect on the teen-slasher genre as a means of surviving their postmodern reality, Gale layers this reality with a new one in the name of profit.

Although Gale walks a fine moral line in the series' first two outings, her investigation into the murder of Cotton Weary is primarily motivated by a hope for closure to the onslaught of copycat killings, despite having also written a book on the events of the second film. Scream 3 delves closer to the meta-crisis than any other entry in the series, with the murders taking place on the set of "Stab 3: Return to Woodsboro." Unlike Stab's reflexive lens to the past in Scream 2, Stab 3 has surpassed the Scream series's chronology, formulating new plots with Sidney, Gale, and Dewey's characters. The plot of Stab 3 will later be echoed by the diegetic story of Scream 4.

The film reveals that Gale Weathers has had little involvement in the Stab franchise by the third film, and so Scream 3 revels in the irony of her entrapment within her own creation. As a result, Gale's role is altered, becoming more ingrained in the media's hyper-consciousness in youth culture.

"Media texts and their consumption often function as the topics of teen conversation, exchange, and even identity, a situation that is reflected and perhaps encouraged by the Scream films. Essentially, the films hold up a mirror to teens, reflecting how they actually converse and interact while simultaneously encouraging them to adopt a media-oriented form of communication. The films reemphasize the vital role that media play in their lives. In fact, within the Scream universe, knowledge of and familiarity with media texts is literally a matter of life and death."

Just as Gale took control of Sidney's narrative in Scream through media reporting and exploitative biography, Hollywood and its teen-media have placed Gale in life-threatening peril. Within this new role, Gale hypothesizes that not only are the murders taking place on set, but the in-universe actors are being picked off in the order they die in the script. Jennifer Jolie (Parker Posey)—the actress that plays the Stab version of Gale Weathers—pairs herself with the real Gale Weathers on the logic that she's being stalked. "Because someone wants to kill me? No, because someone wants to kill you. So, now, starting now, I go where you go. So that if someone wants to kill me, I'll be with you and since they really wanna kill you, they won't kill me, they'll kill you.”

Jolie's explanation, which Posey delivers with a wonderful flurry of panic, sheds insight and self-awareness of the reality that the real Gale has created through her fictionalized retelling of actual events. Furthermore, Jolie's criticisms of Gale are rooted in her own interpretations: "You know in the movies, I play you as being much smarter!" Gale's reputation is no longer grounded in her own actions, but the presentation of herself in wider media. Even Jolie's "Gale Weathers costume" is modeled on the "real" Gale's appearance in the first film, from the exact clothes to the same hairstyle. The costume and hairstyling are designed to meet the in-universe audience expectation of Gale Weathers in a moment of unprecedented media coverage, effectively freezing her "essence" in time.

Jolie is eventually killed in the film's climax, while the real Gale is only bound and gagged by the newest Ghostface, Roman Bridger (Scott Foley). Roman's position as the director of Stab 3 is symbolic of the new narrative hierarchy within Hollywood. Gale, as a writer, no longer has control over the story being told. Additionally, Roman's confession that he orchestrated the events of Scream, and Scream 2 by extension (albeit indirectly), retcons both the narrative followed by the franchise's external audience and the diegetic narrative of the films' characters. Not only does Roman's position usurp the control of Weathers and "the writer," but it also projects the ever-fluctuating nature of a story.

Fortunately for Gale, the death of Roman Bridger, who orchestrated the events of the entire trilogy, brings closure to the meta-narrative crisis that she had created over the years. But in true Scream fashion, the fourth film reopens the wound. Originally conceived as the first in a new trilogy, Scream 4 (2011) fixates itself on the late-2000s trend of horror remakes from the Slasher era. It should be noted that remakes of 80s Slashers Friday the 13th and Wes Craven's own A Nightmare on Elm Street were released in 2009 and 2010, respectively.

Gale Weathers fully personifies the criticisms surrounding these remakes, while also inhabiting a mock one. Reintroduced as being happily married to Detective Dewey Riley (David Arquette) and living a peaceful life in Woodsboro, Gale struggles to reinvent herself as a fiction writer, being plagued by writer's block. As such, Gale investigates the emergence of a new Ghostface in the hope of inspiration. Gale's writer's block serves as a reflection of how remakes are often considered derivative and unimaginative. It metaphorically illustrates not only how she has previously shaped media, but how media has shaped and confined her own being.

Despite being stabbed during her investigation and subsequently being hospitalized, Scream 4 persists in its remake sensibilities. Jill Roberts (Emma Roberts), who is Sidney Prescott's cousin, takes on the Ghostface persona to situate herself as the sole survivor of a new massacre to receive the same fame Sidney received. Immediately inviting parallels to Billy Loomis from the first film, the remake arc is completed with Gale Weathers once again being connected to the killer's demise. After Jill reveals information she couldn't know as a victim, Gale confronts her and serves as a distraction until Sidney can electrocute her. This sequence effectively mirrors Scream's climax in terms of roles, bringing Gale back to the beginning of a cyclical narrative.

Through the narrative loop, the Scream franchise effectively illustrates the hubris of Gale Weathers and her inability to control a narrative that is being shaped around her. Weather's is no stranger to the concept of subjective truth, but her hubris prevents her from fully realizing her own vulnerabilities to it. Now more than ever, the value and conceptualization of a true narrative is being challenged, raising more questions than answers, but firmly places Gale Weathers as its cautionary symbol.