Horrorwood on Location: Halloween in Haddonfield 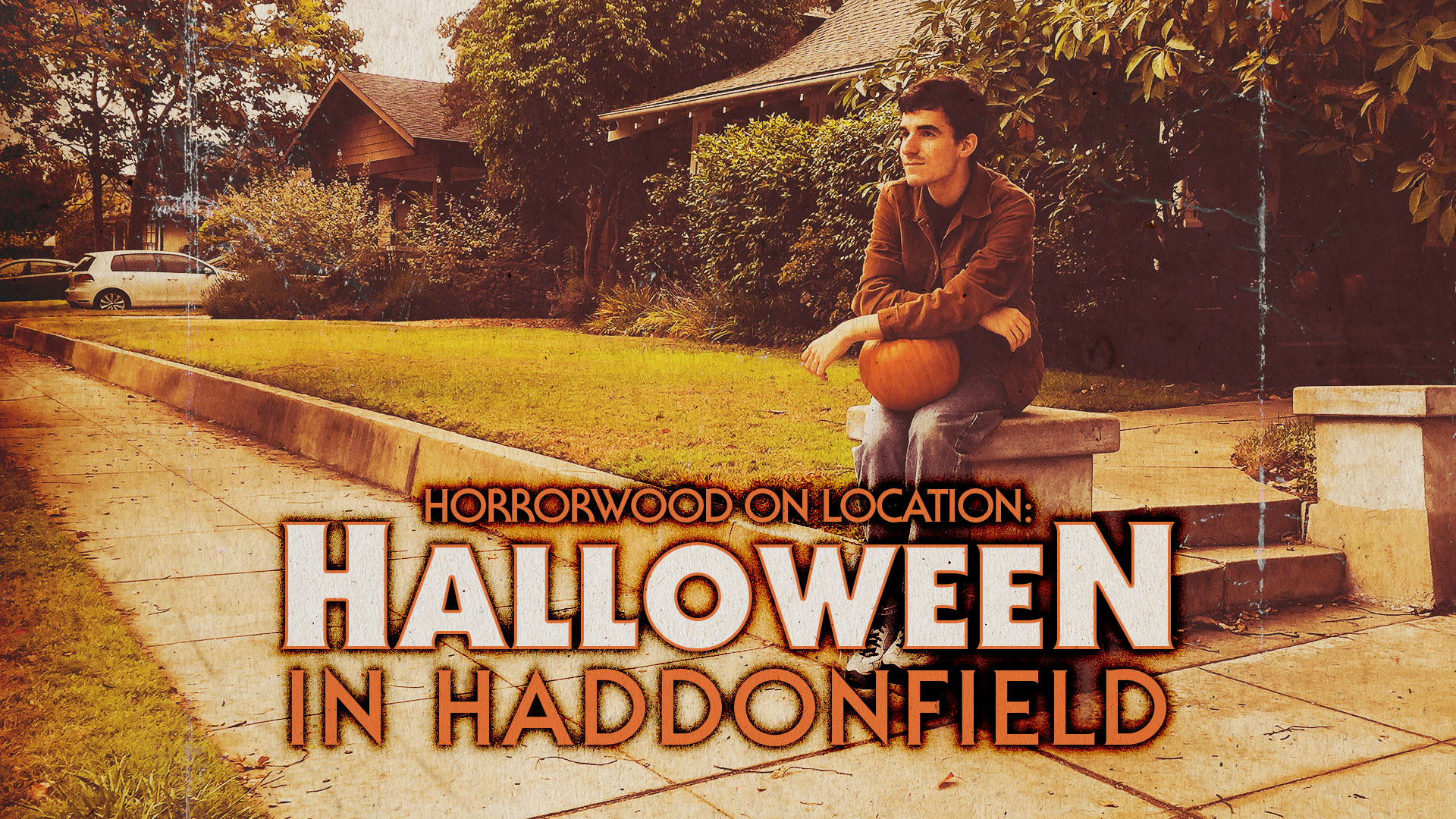 John Carpenter's Halloween has been terrifying audiences since 1978. Once a year, the world turns its eyes to the fictional streets of Haddonfield, Illinois, for a glimpse of its homegrown horror. However, many may not know that the ghost of Michael Myers still haunts the streets of “Haddonfield” today – thanks to a few spirited residents of South Pasadena, California. From a Halloween-themed art gallery to Laurie Strode's porch of pumpkins, Horrorwood on Location invites you to experience a taste of Halloween in Haddonfield.

How did a small town in Los Angeles County become the backdrop for Carpenter's classic tale of suburban terror? As Halloween cinematographer Dean Cundey recalled in The Los Angeles Times, “We were looking for Middle America. Haddonfield… was supposed to be just average America. And South Pasadena’s architectural style is very similar… you know, the clapboard houses and the tree-lined streets and so forth.” This 'Middle America' look has remained largely unchanged, drawing many Halloween fans to the area for a chance to relive their most cherished Haddonfield nightmares.

While the original Halloween and Halloween II (1980) used locations in South Pasadena to bring Haddonfield to life, a number of subsequent sequels in the Halloween franchise did not. Later productions rekindled that small-town spirit by filming outside of California, including locations in Utah and South Carolina. However, for many Halloween fans, South Pasadena remains the true home of Michael Myers... quite literally.

Michael Myers' original childhood home from Halloween 1978 still stands at 1000 Mission St. in South Pasadena. The building, one of the oldest structures in South Pasadena, is private business property. If visiting, please maintain a respectful distance... or else!

Fans can find a more comfortable gathering place directly behind the Myers house, within the haunted walls of SugarMynt Gallery. Located at 810 Meridian Avenue, SugarMynt is a year-round Halloween-themed art gallery featuring original artwork, screen-used memorabilia, and behind-the-scenes photographs from several spooky film franchises. While there is an emphasis on Michael Myers-related content, SugarMynt also oozes with nostalgic spooky décor and tributes to other autumnal favorites, including Hocus Pocus. During the Halloween 2020 season, SugarMynt hosted a “Haunted Haddonfield” exhibition, which combined Halloween franchise-inspired creations with an art show dedicated to haunted places. Naturally, the Myers house was well represented.

Observant fans may notice the Myers house was not always situated in front of the SugarMynt Gallery building; when Halloween was filmed, the house was located further up Meridian Avenue. Nearly a decade after the film was released, the building was set for demolition – only to be saved by a city councilman, with hopes of preserving the nearly 135-year-old South Pasadena landmark.

Its updated address is a boon to Halloween fans in more ways than one; in addition to SugarMynt Gallery's immediate proximity, the Halloween 1978 filming location for Nichols Hardware sits directly across the street at 966 Mission Street. I found myself taken aback at how immersive this particular corner has become, as a key part of South Pasadena's Halloween experience – thanks in no small part to SugarMynt establishing a safe and inviting environment for fans to gather.

I sat down with SugarMynt Gallery owner SaraRose Orlandini to bring Horrorwood Presents readers these exclusive insights about nurturing the legacy of Halloween in South Pasadena.

AJ Danna: Please introduce our Horrorwood Presents readers to SugarMynt Gallery; when did you first decide to create a year-round Halloween art gallery?

SaraRose Orlandini: We opened in June 2015 with no intention of it becoming what it is today! The idea stemmed from my personal love of Halloween (the movie) and Halloween (the holiday) and the constant talk about the house and the film. I am grateful to have met people who “knew people,” which is how I quickly became acquainted with the producer of the Halloween franchise – who then introduced me to the photographer from the first two films, Kim Gottlieb Walker. It wasn't long after that I had my first Halloween art exhibit, which debuted that October.

After spending the next few years doing what others said I should do, by being a contemporary art gallery during the off-season of Halloween, I decided to do what I love and what makes me happy: make SugarMynt a place where every day is Halloween. The switch happened after Halloween 2018, and we’ve been spooky all year ever since!

AD: “Haunted Haddonfield” combined your popular Halloween movie tribute exhibits with an art show dedicated to haunted places. Tell us a bit about what that spooky combination brought to the table, and how you choose your art show themes. Do you have a personal favorite?

SO: I love spooky stuff, and haunted houses are the bread and butter. I had always wanted to do a haunted house exhibit and figured the most unique way to do it would be to create a mashup with our annual Halloween exhibit. After five years of Michael Myers, it was fun to add something else to the mix. We are continuing a mashup theme for 2021's “Haddonfield” exhibit, opening Labor Day weekend: a mashup of the Halloween movies and Trick 'r Treat!

Outside of our annual Haddonfield exhibit, we have done some amazing exhibits I had a blast curating, including our “Monster Mash” classic monster exhibit in February 2020. (Our last maskless opening exhibit, pre-pandemic.) I loved and am very proud of a few other exhibits including tributes to Tim Burton, Hocus Pocus, and Harry Potter. As for a favorite, I love them all! [laughs] But those were definitely some highlights.

AD: South Pasadena plays a perfect backdrop for the unassuming town of Haddonfield, Illinois, with many of the original suburban filming locations preserved to this day. Considering you grew up in the area, did John Carpenter's Halloween factor into local lore? Were you aware of the film as a child?

SO: I saw Halloween when I was a kid, around 9 or 10, but all I focused on was the Myers house I'd seen my whole life. My birthday is October 14, which is another huge reason for my love of the holiday Halloween – so when driving by that particular house en route to my Grammie’s as a kid, hearing my dad say, “that’s the Halloween house” piqued my curiosity and made an impact on me.

AD: SugarMynt Gallery recently got quite an endorsement from a certain figure of literal and figurative royalty... fill us in on that exciting moment!

SO: Getting a shoutout from Jamie Lee Curtis was a massive achievement. The fact that she knows who we are, and told her social media following about us, was a huge deal to my supporters who have been there from the beginning. Not long after that occasion, we welcomed actors Nick Castle and James Jude Courtney, who have both portrayed Michael Myers (“The Shape”) on screen. That surreal experience was all thanks to makeup artist Chris Nelson, who lent us his life-size Michael Myers from Halloween (2018) to display at SugarMynt, and rep Sean Clark, who brought Nick and James into the gallery.

Beyond SugarMynt and Meridian Avenue, numerous other locations from Halloween can be found within walking distance. Laurie and Lynda unknowingly confronted Michael Myers behind the wheel at the corner of Fairview Avenue and Highland Street. (“Hey, jerk! Speed kills!”)

The titled establishing shot of Haddonfield was filmed farther away, deeper in South Pasadena, at the corner of Oxley Street and Montrose Avenue. The infamous hedge Michael Myers stands behind is also in the neighborhood, situated between the houses at 1019 and 1025 Montrose Avenue.

Please be extra considerate if viewing this landmark from the street; unlike SugarMynt Gallery, the hedge is located on private residential property.

Not all such sites are off-limits; however, the stoop Laurie Strode sits on at 1103 Fairview Avenue has been a notably welcoming location for Halloween fans. For several years prior to the time of publication, the property owners have left pumpkins in the area for visitors to borrow and pose with while retracing Jamie Lee Curtis' footsteps.

The Halloween franchise has entertained and frightened viewers for decades, but never before in the film's history have Halloween fans experienced the level of immersive access available to them now. Between the release of several new Halloween films from Blumhouse, to the existence of a year-round Halloween art gallery behind the Myers house, to pumpkins for posing on Laurie’s street, the legacy of Halloween has become one with its homicidal star... immortal, unstoppable, and showing no signs of slowing down.