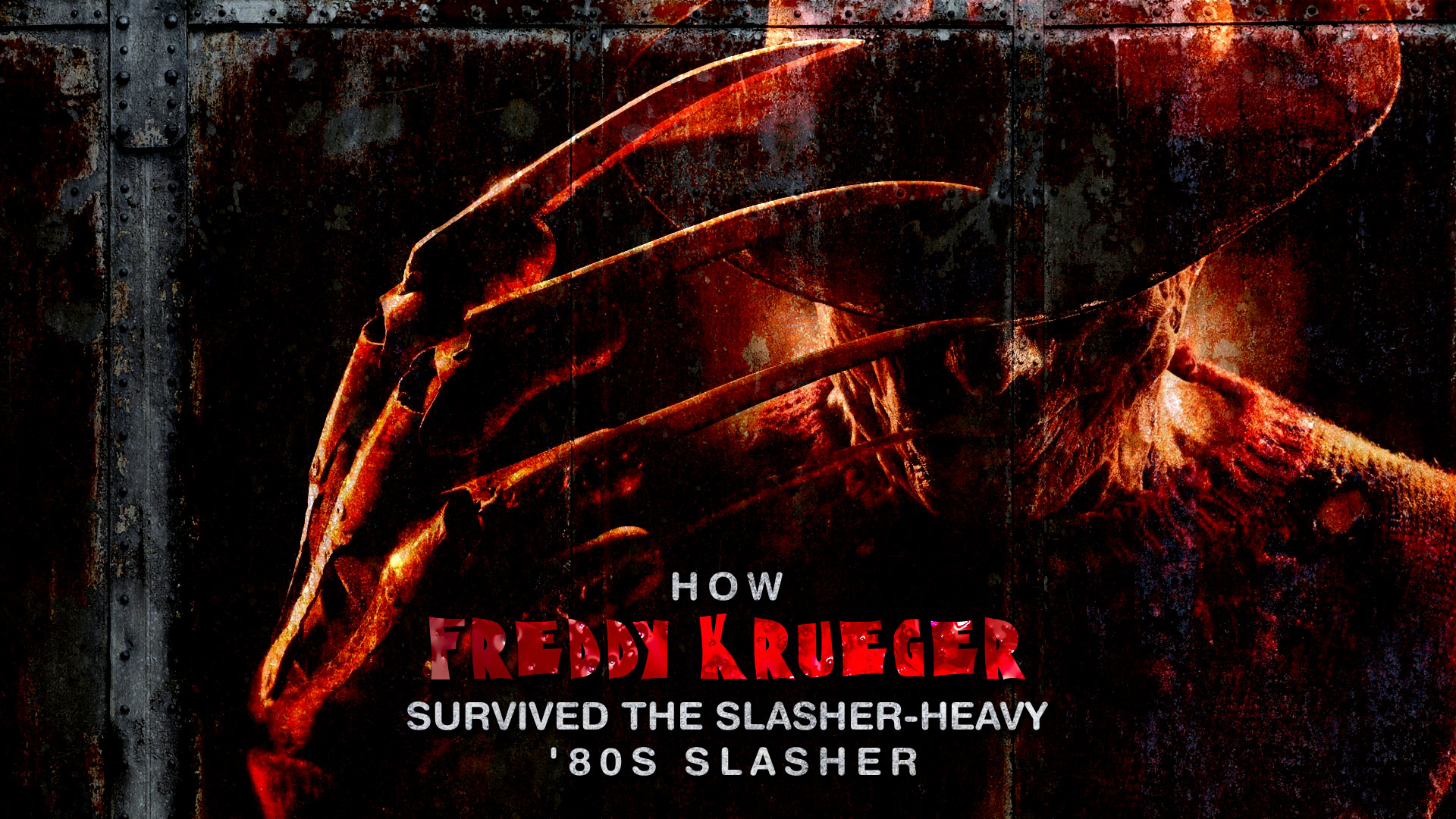 In a decade populated by some of the finest films of the horror genre, the rise of mainstream success for David Cronenberg with Videodrome,The Fly, and Scanners, alongside John Carpenter's The Thing, and a whole host of other opportunities for new horror directors, the cards were certainly stacked against A Nightmare on Elm Street. Later outputs of the series leave much to be desired, utterly devoid of the heart and soul found within Wes Craven's original work. Even with the franchise's problems, the Freddy Krueger character and the series he lived in thrived during this period of horror. It's fascinating how the Krueger character has survived for so long despite the decline in Elm Street films' quality.

Considering this lack of quality, it's impressive that Freddy Kreuger and the series he starred in has captured the minds of an entire generation. For instance, my father is horrified by the terrifying tones, the icy claws, and the stripy jumper that complete Robert Englund's transformation into Krueger. I'm not too convinced, certainly not as much as my parents are of Krueger's fear factor, but maybe that's due to a lack of nostalgia. This lack of nostalgia may have impacted the viewings more than I'd first expected. With the dawn of CGI and mass-produced horror franchises, Krueger's charm is diminished somewhat. But there must be an apparent reason as to why this character is so beloved, not just by fear-ridden adults, but teens making their way into the nightmare worlds found within Craven's creation.

One of the most entertaining and exciting reasons for this survival is how the Krueger character cultivated a pop culture niche. While Jason and Leatherface were slashing and hacking up the cinema, they were verging on the side of realism in their initial outings. Think urban legends and redneck horror stories, rather than literal nightmare fuel. It doesn't feel too far-fetched for one to say that Krueger embodied the feeling that keeps you up at night. The bumps in the dark, the creaking floorboards that you hear from outside your door. In my case, the shaking and rumbling boiler from in the kitchen, the ever-encroaching alarm bells ringing. It's terrifying, but that wasn't Krueger. That was just a boiler leak. Craven's ability to write a character that can turn the ordinary into something scary is a credit to the series' relative survival. It's the reason we scuttle up the stairs as soon as the lights go out. That childish yet inevitable fear of the dark is, in part, thanks to memorable, reality-breaking characters like Krueger.

A bulk of Krueger's lasting appeal comes from the performances that made him memorable. Robert Englund expanded and molded the character in ways that fit the narrative as best they could. For his first three outings, he was a convincing and alluring villain, a demon dedicated to destroying the dreams of the children of Elm Street. It was a superb performance, one that had genuine chills surrounding it, but also a wry smile at the forefront, as well as a whole host of unique kills to keep the hardcore horror fan invested. It seemed almost too good to be true, and it's a testament to Englund's work that he was able to keep up that consistency throughout his time with the character.

While the later films themselves may be of a middling to low quality, it's a testament to Englund's abilities and the character's longevity that they managed to draw box office attention. Gone were the days of slow-building terrors, and a new era of one-liners, pop culture, and Breakfast Club character traits were hastily ushered in. Krueger was only as good as the characters that surrounded him. It's why the first and third entries into the series are considered the most worthwhile and engaging. But even in weaker entries to the series such as A Nightmare on Elm Street 4: The Dream Master, Krueger still has an undeniable charm to him.

Weak writing within these later moments of the series is a detriment to the majority of new characters. The lack of consistency, coupled with a slate of directors who couldn't hold a candle to the original vision, led to a severe and sudden downturn in the quality of the A Nightmare on Elm Street series. By the fourth film, the reliance on pop culture references, ill-timed repetition of earlier entrances into the series, and wilder ideas, and you have a mess on your hands. Englund stuck around for these later interpretations, the saving grace of every one of them. Nobody could've managed the Krueger origin story if it weren't for Englund's charm and elegance brought to the role.

So, it seems that the success of the character teeters on the man behind the knitted jumper. The 2010 reboot, A Nightmare on Elm Street, failed spectacularly in revamping the franchise for a new audience. The main issues in that film weren't of Jackie Earle Haley's casting in it of itself, but of those around him. While Freddy Krueger was a staple of the series, recasting the role and bringing in a clean slate of cast members that no audience had any connection to make for a difficult transition. It follows the relatively typical trend of glossy, modern horror flicks but loses the series' charm and experience' only draw. The real reason Krueger survived the '80s period is simply because of how great a talent Englund was for the series.

If Englund's performances were the main reason for its success, there are other, less noticeable reasons that Krueger survived the '80s. Perhaps three seasons of a spin-off TV show, Freddy's Nightmares kept the character alive for a little longer than it should have. It was one of the few series to make the leap from the big screen to the small screen, bringing Krueger quite literally into the homes of anyone who owned a television. His character went from movie-going horror show to bitesize household name. Weekly episodes fleshed out the character's backstory for those interested, easily accessible for potential horror fans and general audience members.

The prolific nature of the actor behind the character and the character itself was fundamental to this success. Cameo appearances by the actor and the character can be found everywhere. From adverts to magazines, and even a brief stint on MTV. All of this possible, perhaps only because of the low quality in the later films in the series. They opened up a refreshingly funny and sinisterly likable villain from cold-blooded child murderer to an A-ha parodying, sunglasses-wearing protagonist. The focus turned away from a group of unlikely teens banding together to vanquish evil and turned toward the villain itself.

If that were the end of the dream-destroying monster, then so be it. But Craven's return to the series with New Nightmare showcased an introduction to the meta style that he would utilize later with Scream. To give Krueger a tinge of horror once more, an overhaul was needed, and the best chance they had of such a significant challenge was to pair Krueger up with his creator. For me, New Nightmare falls short of being a wholly vital horror piece. It's oddly contrite, wishing to wash away the comedic pangs the later outings of the series had, while at the same time prying at the new tokenisms those moments had to offer. It's an odd blend, but one that sees us through to the end, a conclusion to a character that haunted cinema for a decade.

It works as an arguably strong outing compared to the previous three installments the series offered up. Krueger reclaims the horror he was known for and receives a send-off that is ultimately worthy of the character. The only way to salvage the character was to throw canon out the window, implying instead that the Krueger character is just that, a movie villain that somehow comes to life and haunts cast members of the series. There's never a moment that feels like it's the curtain call for the character, though, and it aides the mystique and memorability of the role. We'll never see closure on this character, or a lot of other characters throughout horror history, but Krueger's solo swansong goes to remarkable lengths in salvaging what they can of a comedically tainted household name.

Not so much tongue-in-cheek as it were an innovative idea, casting aside the earlier films of the series felt like a necessity not just for the survival of the series, but also for the character. In an interview with TooFab on April 6th, 2020, Englund reiterated that he had hung up his sharp claws and tattered fedora for good. Who, then, could replace his defining role? Part of the charm Krueger's character has is the face behind it. The character's makeup and effective horror were only part of the mysterious thrills the character could offer. Englund as a performer brought unique life to the character, a style that was discarded for the 2010 reboot, A Nightmare on Elm Street.

It's admirable to see how much love there is for Krueger, from Robert Englund's passion, to the devotion of Elm Street diehards. I imagine that's absolutely part of how this franchise survived the stacked period of the 1980s, with consistent box office success and a spin-off television show. Dedicated fan bases aren't something new to the world of film, and Krueger's time on the big, and small screen, still has a cult following. It's that mixture of mainstream horror and outlandish ideas that allowed Krueger to survive these competitive decades. His childish charms and effective terror co-exist with frightful success. You can't kill what resides in our dreams, and Krueger very much still does. Perhaps we haven't seen the last of him.