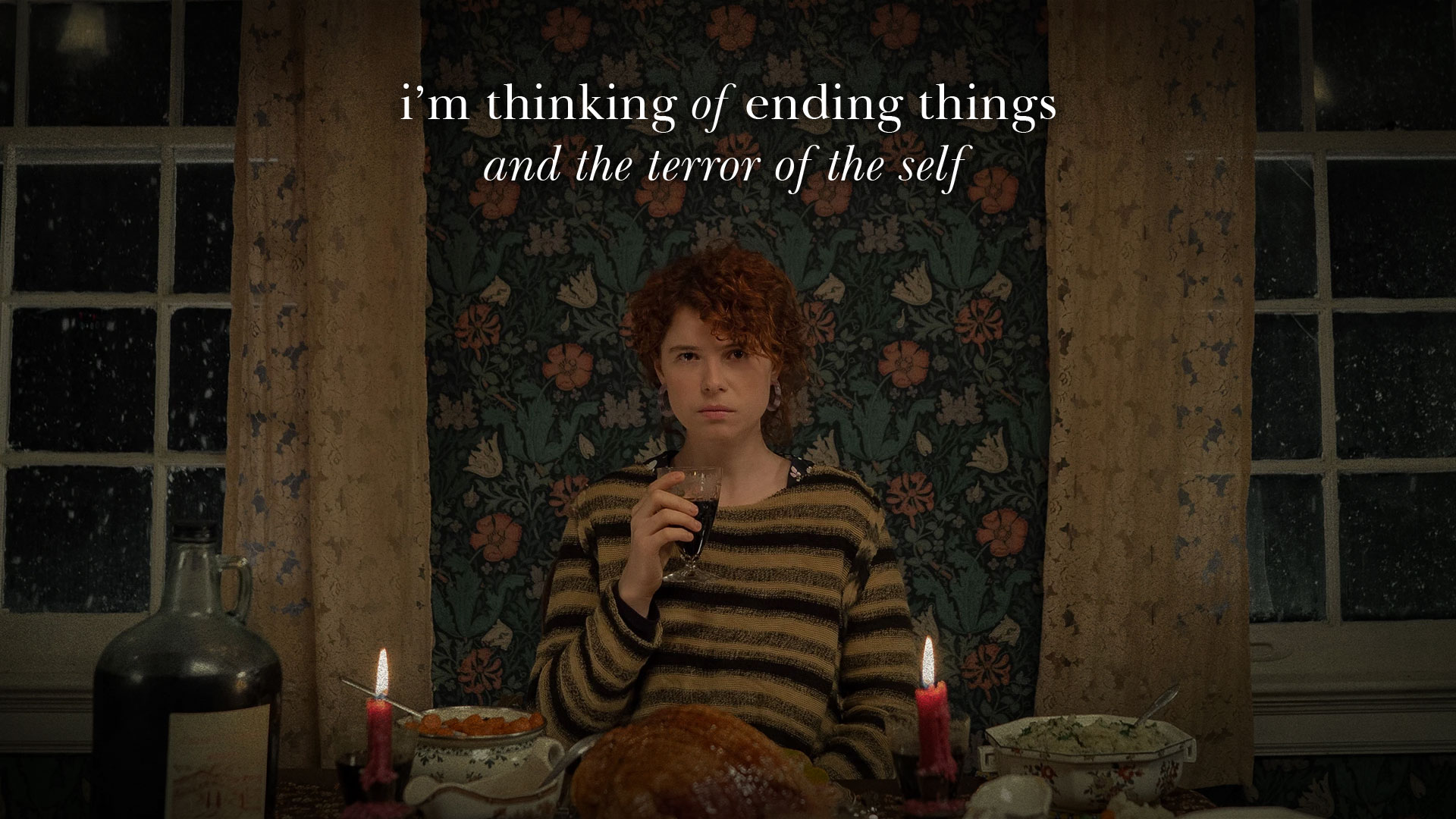 On April 13, 1973, Henry Darger died in Chicago, Illinois, at 81. Darger was a recluse, an isolated old man who was known by his neighbors as an eccentric who rarely spoke to others. He worked menial jobs as a janitor, dishwasher, and other basic labor jobs all his life until he retired in 1963. After being moved into "St Augustine's Home For The Aged" by his former landlords Nathan and Kiyoko Lerner, a massive collection of self-produced art was just a scant few months before his death discovered within his living space. Sprawling novels as thick as holy scriptures, giant tableaus of art, and all manner of mixed media composition, all made by Darger himself. When Nathan attempted to reach out to Henry Darger at a visit about his art and his compiled works, all Darger could muster in regards to his art was a brief sentence, "Too late now."

I'm Thinking Of Ending Things is the first film Charlie Kaufman has directed and written since Anomalisa in 2015. Kaufman has made a career out of plunging within the self, writing and directing several films that dive into the pain of being endlessly stuck within the prison of selfhood. In one way or another, these films usually represent himself as an idol, the main character, or relation to something within his own life. This film differs from its seemingly straight adaptation of an already established work, though its divergences are where Kaufman makes his mark as a writer-director.

The original novel of the same name by Iain Reid is a work of existential horror, not dissimilar from the type the film indulges in but focuses on a different fear. Whereas Reid's narrative hangs on a knife-edge that resolves in a massive plot-twist front-ended by heady philosophical discussions between Jake and his girlfriend, the end we find for these characters is resolute, the horror is clear and definable. Kaufman's subversion of this is massive, in that from the very start, there are contextual clues of two stories butting up against each other.

From the onset of the film, when Lucy/Lucia/Louisa (Jessie Buckley) and Jake (Jesse Plemons) are together on their trip to meet Jake's parents (Toni Collette & David Thewlis), there's a magic to the popping colors, a majesty to both the look and sound of the film, but early on we get these glimpses of a cold menial life. An older man (Guy Boyd) living in a drab apartment, the same man working as a quiet janitor in a high school, considered odd by the students as he walks down the hallway, on his lunch break watching a typical cliched rom-com with an easy to swallow resolution. These two realities play out simultaneously, one tinged by the magic of Hollywood and another relentlessly stuck in the muck of the ordinary, the prison of mundanity and complacency. Soon enough, these stories blend and shape into one amalgam of continuity.

Henry Darger's most prolonged running work, now known as In The Realms Of The Unreal, is an escapist fantasy work based upon Darger's obsession with the works of C.S. Lewis, Booth Tarkington, and his deep connection to Christianity. A 15,145-page work with fifteen dense volumes, including paintings, multi-media compositions, and writings. A work about the fictional Christian nation Abbieannia fighting against an evil atheistic nation known as Glandelinia that enslaves children and tortures them, which mirrors the abuses he faced within mental institutions and group homes throughout childhood.

The book's protagonists are the seven Vivian Girls, princesses of Abbieannia who fight to protect their nation's children. Darger himself appears in the work as a "protector of children" fighting on the Vivian Girls' side. It's clear that Darger personifies himself through these girls, separated from their father just as he was as a child, he gives them male sexual characteristics, seeing them as no different than himself as a child. But he is not given space to indulge in this fantasy; he is charged as their protector. This isn't his play place. For him, it's too late to be the protagonist.

As I'm Thinking Of Ending Things hits its narrative apex, it becomes abundantly clear, The Janitor is living within his own world not dissimilar to those created by Henry Darger. Darger was influenced by Victorian fiction and the literary fantasy of the early 1900s. The world created by The Janitor is stained by the pop culture of our time. He loves the films of Old Hollywood, he adores musicals, he memorizes old Pauline Kael reviews and the writings of David Foster Wallace. This world he has built is Dargeresque in nature, a world shaped by the works he cherishes. He is even a part of that world, but not as the star. He splits himself up into Jake and Lucy. He sees equal amounts of himself in both the masculine and feminine. We even see Lucy see herself in a picture of Jake, prompting her to ask Jake who that is, he says it's him. However, it clearly bears a resemblance to Lucy.

The last work by Henry Darger was called The History Of My Life, which started in 1968, was an attempt to re-trace the traumas and pains he faced in childhood that haunt him to this day. For the first 206 pages, he attempted to create a biography, detailing his life and childhood. After this point, though, the story devolves into fiction about a tornado known as "Sweetie Pie" and the devastation it wrought, possibly based upon childhood memories of seeing a tornado. Soon after writing this, his health began to decline, and his writings began to slow. He was hit by a car in 1969, which made him nearly immobile until his death. His only writings were his daily diary entries that stopped a year before his death. He lost all motivation as his body failed him.

The constantly shifting state of Jake's home and his parents reflect the all-consuming fear of age that The Janitor shared with Darger. This fear of age comes from the body's failure and mind, Darger as he neared closer and closer to death, his frustration with his childhood angered him more and more. The Janitor's response to idealizing the past is repeatedly to create a perfect family, but no matter what he does, his fear of aging takes precedence. His father's dementia, his mother bed-ridden, then an alternation between the two of them in the prime of their youth. The further away he is, the more he wishes things could return to normalcy.

This idealization isn't only focused on his parents. We get another glimpse of this idealized reality as they leave his family's home. When Jake and Lucy stop at the "Tulsey Town," there are two girls employed (Hadley Robinson & Gus Birney), nearly identical blonde teenage girls who snicker, looking at Jake while Lucy tries to order from the window. A third girl appears (Abby Quinn), and she shares a similarity with both Lucy and Jake, having similar features and the same distinctive burns on her arms. The girl tells Lucy that she's nice and that she loves the way she looks. She remarks that there's a certain hardness that comes with being pretty as if she's never known what that's like.

The third girl tells Lucy that she doesn't have to go forward in time that she can stay in this place. Through this girl, The Janitor almost begs for reality to not cut into his fantasy, for them to not venture into the school, where this world will cease to exist as it once was. She begs, in desperation against reality, to stay in this moment like amber. She wants to be like Lucy and admire her all at once. But this desperation can't stop the passage of time, and Jake and Lucy depart as she looks in horror.

After this detour, the couple continues to drive, Jake in frustration wants to drop off the melted "Brrs" at a nearby high school, to Lucy's opposition. Nonetheless, they stop, and he drops off the drinks in the trash. After arguing, they share a last kiss, as Jake sees The Janitor watching them. He proceeds to chase The Janitor into the school, perceiving him as a threat, and Lucy is locked out of the car as she screams in anger for Jake. As she runs to find him, she comes face to face with The Janitor. As she begins to describe who she is looking for, she admits the reality of The Janitor's obsession with Lucy, a falsity born out of Hollywood's easy romance stories coupled with his desperate desire to connect. As she unravels, she forgets what Jake even looks like, or what makes him unique. Almost out of confusion, she hugs him and says goodbye.

Eventually, Lucy finds Jake, and their personas dance a last performance mimicking a dream ballet from the musical Oklahoma, a musical Jake admitted to being acquainted with earlier. This dance is a piece of visual art. The personas of Jake, Lucy, and The Janitor dance their dance wordlessly, culminating in a fight between The Janitor and Jake. As a knife is plunged in Jake's heart, he falls to the ground, covered in snow, as the original versions of Jake and Lucy depart from the scene.

All that we're left with is The Janitor. He returns to his car, debating whether or not he'll turn it on, electing not to instead enter a hallucinatory dream state instigated by frostbite. He goes through a fantastical sequence, first seeing a "Tulsey Town" animated short playing in front of him, then seeing a maggot-infested pig, speaking to him as he runs through the halls of the high school naked. He follows the pig as it assures him that there is kindness in this world. He only had to look for it. He asserts that someone in this world has to be the pig, that him, The Janitor, everything is all one big shared idea. Leading into his final moment, Jake appears in old age makeup accepting his Nobel Peace Prize.

In a scene pasted intentionally from A Beautiful Mind, he performs one last time in front of a full audience of all those we've seen so far. His parents, the "Tulsey Town" employees, Lucy, and all the high school students all aged as if in a grandiose biopic. He cries as he gets a rousing applause for his rendition of "Lonely Town" From Oklahoma. His last imagined moment, a pastiche of fictions, bundled in the warmth of his creations, away from that cold night. Even in this finale, the memory is not The Janitor's own.

In Darger's end, he had nothing; no money, no family, no friends. All that is left of his records before he died is a final diary entry:

"January 1, 1971. I had a very poor, nothing like Christmas. Never had a good Christmas all my life, nor a good new year, and now... I am very bitter but fortunately not revengeful, though I feel it should be how I am..."

The true terror of the self lies within the knowing reality that one day as an individual in this world, we will become ash, the cascading feeling that one day that self will go away, and all that will be left are what we created and who we touched. Henry Darger created his works out of a desire to be part of a beautiful world, different from the cruel reality he lived. As his works are consumed, people can relish all manners in his interpretations, but that world died long ago, tarnished by the tendrils of time. The Janitor's end is little different. This world could've been populated by the facets of himself, is but a cold comfort for what is to come next. It's too late now.