‘Night in the Woods’ and the Horror of the Mundane 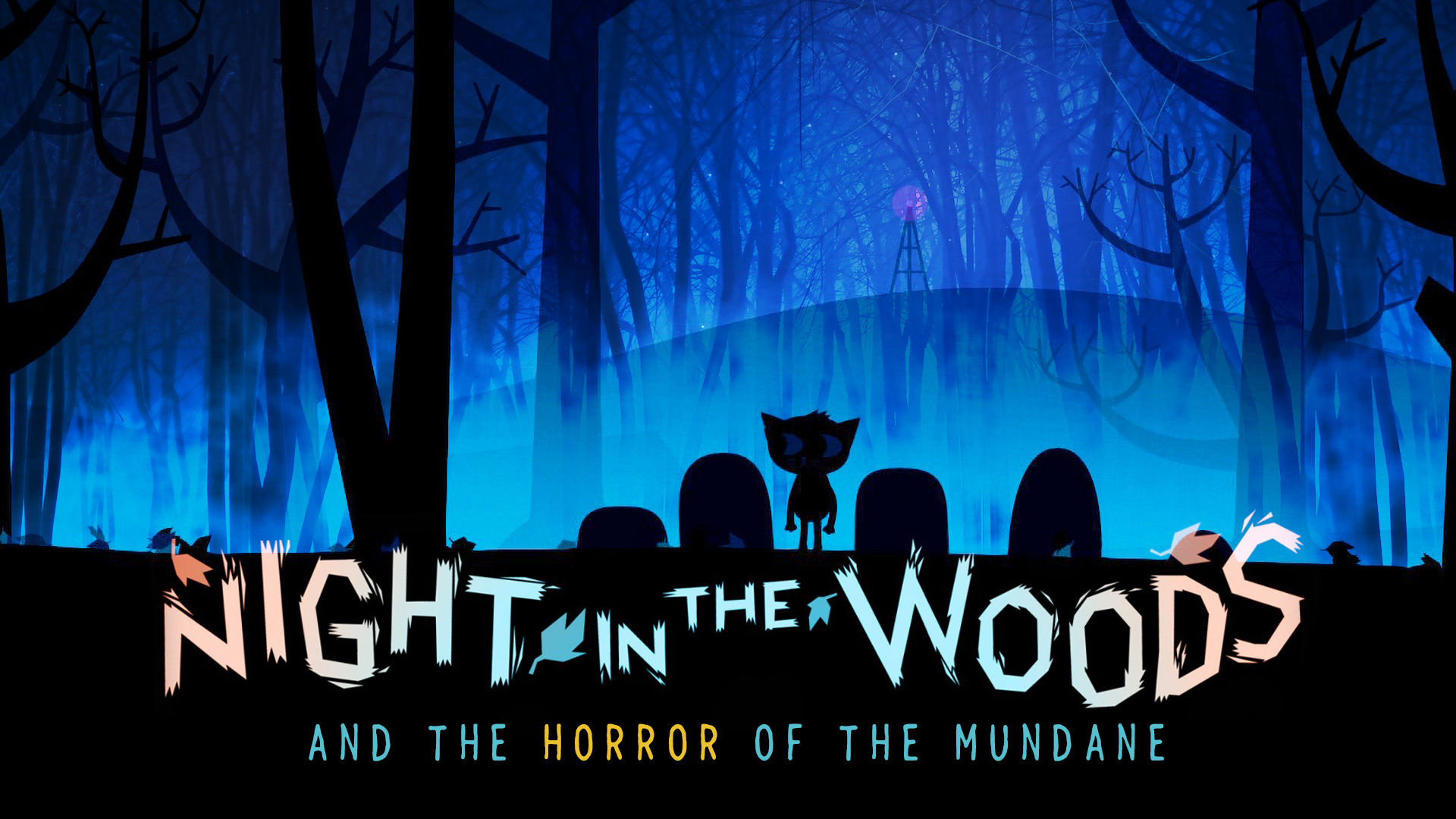 Lovecraftian horror, also known as cosmic horror, is a branch of the genre that often slips under the radar. Described by writer K. Bevis on Medium as, "a horror that looks at the macrocosm of life," Lovecraftian horror plays on humanity's collectively held fears of insignificance within an ever-expanding universe. Some films, TV shows, and video games make this horror overt, such as Drew Goddard's The Cabin in the Woods and Chaosium's seminal table-top role-playing game Call of Cthulhu. Others let it simmer as undercurrents, like David Cronenberg's The Fly and Robert Eggers' The Lighthouse. Indie game developers Infinite Fall take this even further in Night in the Woods, a side-scroller that paints its cosmic horror in background tones, exploring it through the terrors of mundanity.

A single-player experience focused on seemingly aimless exploration, Night in the Woods is a game that is redefined by its conclusion. You play as Mae, 20-year-old college drop out, as she returns to the old mining town she knows as home: Possum Springs. Jumping about town, talking to local denizens, and catching up with old friends, the game feels very ordinary. Even the mysterious disappearances of some resident youths don't seem too suspect. This changes when Mae and her friends find those responsible for the kidnappings and learn that this is not their only wrong-doing. Dedicated to the prosperity of their home, these hidden figures feed the misfit adolescents that few would miss to an unseen, unknowable being living deep within the mines known only as "The Black Goat."

A subtle nod to the Shub-Niggurath deity created by Lovecraft associated with the epithet "The Black Goat of the Woods," Night in the Woods' final reveal, is expertly crafted. "The twist can't betray the theme," states Travis Davies at The Writing Cooperative, discussing how to succeed at a twist ending. It is precisely by staying true to its theme and redefining it that the game triumphs with its late revelation.

The world of Night in the Woods is one where you are confined to walking the same roads and talking to the same people. You are unable to break the routine, something we all can relate to, and it is this very repetitiveness that makes it the perfect place for such an ineffable being. The presence of The Black Goat recontextualizes daily life's mundanity in a way that is reminiscent of the ground-breaking twist of The Sixth Sense. Not simply is Mae trapped in her dead-end home, but also by this unimaginable being, and she didn't even know it. Much like M. Night Shyamalan's supernatural thriller, you are drawn back to the game to re-experience it with your new knowledge. Then, what comes together is a showcase of how effective this macrocosmic horror is in a story so microcosmic in scale.

As you replay the game, you are consistently haunted by your new knowledge. Mae's bad dreams are no longer just nightmares brought on by a troubled past, but a scene broadcast by a Lovecraftian god. With every closure of local businesses and every citizen moving away, you are forced to question whether these minor mundane tragedies are the beast's doing, unsatiated by the sacrifices received. Every interaction is different, despite being exactly the same as before. You even begin to notice subtleties in the narrative given new depth, such as the unexplained absence of Mae's parents on "HarFest night" (Possum Springs' take on Halloween), a night on which you now know a sacrifice to The Black Goat took place.

Yet even without this revelation, the core idea behind cosmic horror can be found everywhere within Night in the Woods. The beautifully designed world where everything looks like a collage of colored paper is marred by boarded-up shops, graffiti-covered murals, and shopping centers emptying as fast as the pews in the church on the hill. Townsfolk will tell you how they're planning on moving or how they intend to make Possum Springs seen by "the market," which is consistently personified by council member Greg as if it is a living breathing thing able to save the town.

It is something that I believe we all become increasingly aware of with time. As we leave home for the next chapters of our lives, the home we return to is never quite the same but not so drastically different to feel foreign. Instead, it makes us the outsider. It's a particularly scary notion as, just as Lovecraft reminds us, we can do nothing but watch the changes made in our own small worlds to appease "the market." As such, Night in the Woods feeds on adult fear in a way that is comparable to Rosemary's Baby and The Fly, for what is more terrifying than the feelings of the futility of watching your home, your loved ones, and yourself fall into disrepair?

Real-life matters are the most terrifying elements in Night in the Woods. One of Mae's best friends, Bea, agrees by saying that "the scariest stuff is like really really boring." After Mae asks her to tell a scary story, it's not one full of ghosts or monsters that Bea shares but, "a regular stranger person outside your window. And he's from the bank. He's here to tell you they're gonna take your house." Though not as immense as an Eldritch being, Bea's banker still stands as an abstract entity to be feared, perhaps even more so due to their place in reality.

K. Bevis for Medium goes on to say that "the horror in cosmic horror lies in the characters realizing that they are powerless in the face of beings and forces that go beyond their comprehension." What else is the banker, the economy, then, if not a cosmic horror? Night in the Woods shows us that The Black Goat is much the same as "the market." While only the former literally consumes the young's lives, they both swallow the dreams of those left alive. Social and economic security are things the youth of Possum Springs have learned to live without, and although it is scary, we are shown people who get by nevertheless.

Night in the Woods is preoccupied with the horror of the mundane from its narrative to its mechanical elements, from The Black Goat reminding us of our smallness within a vast universe to a council member striving for something increasingly fleeting. The cosmic horror only underlines the questions raised by Mae's journey home: how much of our lives can we choose for ourselves and how much is forced upon us? This is not to say that Night in the Woods is a hopeless or pessimistic game. On the contrary, the final message is one of hope. Hope that, together in this beautifully realized found family, they can get better. That things will get better. Or at the very least, that they can't get worse.