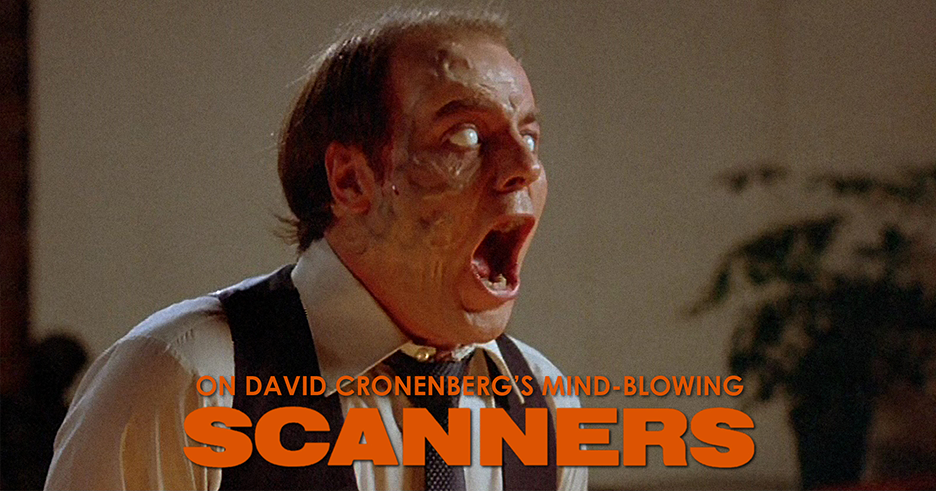 In the dark, cybernetic world sprung from the imagination of writer-director David Cronenberg, some people are born with powerful telepathy known as “scanning.” Scanners has given us some of the most iconic and gruesome images of all time. Perhaps it’s surprising that a film primarily about mental forces is one of the crucial body horror films. It's a subgenre that focuses on the profound terror of embodiment—that is, the state of existing with and within a complex biological machine whose ever-changing logic dictates all of our experiences. The film–like many of Cronenberg’s–deals with our relationship with technology and how it impacts our ways of physically moving through the world.

In a move one would expect in a techno-capitalist dystopia much like our own, a security firm called ConSec has solicited scanners for a research program to further understand and potentially capitalize on the scanning phenomenon. But a stunning act of violence occurs during a routine scientific demonstration, making it all too clear the power of the forces the corporation is hoping to exploit. Through this singular, blood-soaked sequence, we quickly understand that scanning is visceral and its capabilities awesome—in the biblical sense of inspiring both great admiration and great fear.

Even if you haven’t seen the film, you may have encountered the assassination scene in which a man's head explodes, a symphony of gore that remains as shocking now as it did in 1981. It's an image that haunts the rest of the narrative as much as it does the aura of the film itself and has found its way out of the film to become a sort of meme. You may have seen it on a list of horror’s most stomach-churning moments, or as an evocative GIF on social media. As Kim Newman points out in his essay for the Criterion release, the exploding head is frequently shown out of context, more remembered than the film itself. Mind. Blown! In this case, literally.

The scene takes place in a dimly-lit auditorium, where a scientific demonstration is just beginning. Two men sit on the stage, one a volunteer from the audience, the other a prim, bespectacled scientist. The volunteer is instructed to think of something, which the scanner will then extract from his mind. Both men concentrate. The audience silently observes. But something is wrong—the bespectacled man writhes in his seat, while the volunteer, eyes shut, is smirking. The tension mounts until the scanner is shaking from the buildup of pressure. Then comes a sudden explosion, vividly red and wet, as the scanner’s head completely blows apart.

The volunteer, Darryl Revok (Michael Ironside), is actually a powerful scanner himself and the head of an undercover group with nefarious intentions. ConSec sends out their own scanner, Cameron Vale (Stephen Lack), to investigate. Vale pursues Revok across drab cityscapes and through laboratories, with each step learning more about his powers and their vast implications, not only for his own life, the future of humanity itself.

Gory effects were crucial in demonstrating the intense physical manifestations of scanning on the body. Like many other films produced during the heyday of body horror in the late ‘80s and early ‘90s, Scanners utilized practical effects techniques. Technical advances made during this time allowed horrific transformations and realistic violence to take center stage, generating moments of chair-squirming disgust. In Scanners, the most gruesome bodily transformations in the film occur while one consciousness is locked in battle with another.

Part of the lasting impression of the head exploding scene comes from the evident care the filmmakers put into it. The practical effects used to create the explosion render the image almost painterly. And the sequence is filmed artfully, which critic Steffen Hantke notes as a hallmark of Cronenberg’s work overall, referring to it as a framing of "the sublime." The metallic buzzing in composer Howard Shore’s digital score intensifies as the camera cuts back and forth between the two men, ratcheting up the tension before finally pulling out to a wide shot as the head is torn apart. Somehow, the climax of the scene always feels surprising, even if you’ve seen it before.

Later, in a showdown between Kovack and Vale, the bodies of the two men begin to break down as their mental battle escalates. Blue veins bulge out of Vale’s skin, creeping slowly down his arms and up to his temples. Kovack’s eyes go completely white, as he yells, "I’m going to suck your brain dry!" When he’s finished, Vale’s desiccated, skeletal remains lie crumpled on the floor. Along with his mind, much of his flesh and viscera have deteriorated in the battle.

Cronenberg’s films often complicate the relationship between body and mind, which he does not understand as separate or in opposition to one another. As put it in an interview with Bomb Magazine, "The mind and body are completely dependent and interrelated. The mind is somehow organic and physical. It’s only our perception and our culture that keeps them separate." Of course, centuries-long philosophical discourse exists about the relationship between the body and mind, going back to Plato. Writing in the 17th century, Descartes famously argued for dualism: The mind existed separately from the body. Contemporary science favors a complex interplay between the functions of the body and brain, from which our sense of selfhood mysteriously derives. But dualism still permeates much of human thought and culture, and thus, it remains difficult to reconcile our inner and outer worlds and the points of contact between them.

One uneasy assertion of scanning is that it’s possible to bridge minds—not just two, but many at once—causing a loss of stable selfhood. This may be part of what makes the phenomenon so distressing to many of those who possess it. In fact, scanners are barely functional without using a drug called "Ephemerol," a substance that suppresses the intrusive thoughts of others, and happens to be a product produced by ConSec.

However, there are other means of keeping the thoughts at bay. Vale tracks down an elusive artist (Robert Silverman), who channels the voices he hears into unnerving works of art. These also provide useful visualizations of the scanning process: A mound of clay faces mashed together connected by strings to the head of a gaping man below them, a giant plaster head that lies on its side, taking up half the studio floor. Vale and the artist sit inside the skull, talking. When Vale introduces himself by saying, "I’m one of you," he means a scanner. But the artist misunderstands, confusing Vale for another voice in his head.

In addition to anxiety over the human mind’s permeability, the film explores the utopian possibilities of scanning. Through the artist, Vale comes into contact with another group of scanners, this one led by Kim Obrist (Jennifer O’Neill). This group engages in meditative group scanning to explore the power of shared thought without shying away from what makes it a scary experience. "Scan together until we become one," they chant in their minds, "the power we can generate when we focus our scans together is fantastic, terrifying, and exhilarating."

Still, the human evolution implied by scanning goes a step further. Vale learns that his powers give him the ability to scan computer systems as he would a human brain, hinting at how such systems, such as computer networks and even social media, are already extensions of the human mind. The power of the human mind sent through these machines is just as explosive. In one pyrotechnic scene, Vale connects to the ConSec computer network through a phone line, exploding a modem in the laboratory and sending scientists sailing across the room.

Cronenberg is concerned here, as in films like Videodrome and Existenz, with the ways people manipulate their environments and are, in turn, changed by their inventions. As he told Interview Magazine’s Chris Wallace, "I’ve always seen technology as an extension of us. So it makes sense that technology becomes part of us, it returns to us." When we build new tools and integrate them into our daily lives, we alter our ways of thinking and moving through the world.

Scanners is a prescient film in the way it considers the effects of how technology would make a meeting of the minds possible and how this tends to amplify the impulses that are already there, both good and bad—the desire for domination or the desire for community. Within the promise of technology are both utopia and chaos. Cronenberg believes in the fantastical because our world is unpredictable and not fully understood.

It’s apt that the exploding head sequence has taken on its own life online; when minds meet on the internet, explosions go off, which can be a great or terrible thing, depending on the circumstances. What happens to your mind, technology-fueled or otherwise has real effects on the body you live and move around in, whether that means conditions created by conversations that originated in clandestine message boards, the diminishing of attention span, or consequences we have yet to discover or foresee. The cursor blinking on your screen is connected to the blood pulsing through your veins in ways that might not be good or bad, but which we certainly don’t yet understand.