By: Jamie Alvey | November 01, 2021
Home / Articles / The Complicated Gothic Villains of ‘Crimson Peak’ and ‘The Haunting of Bly Manor’ 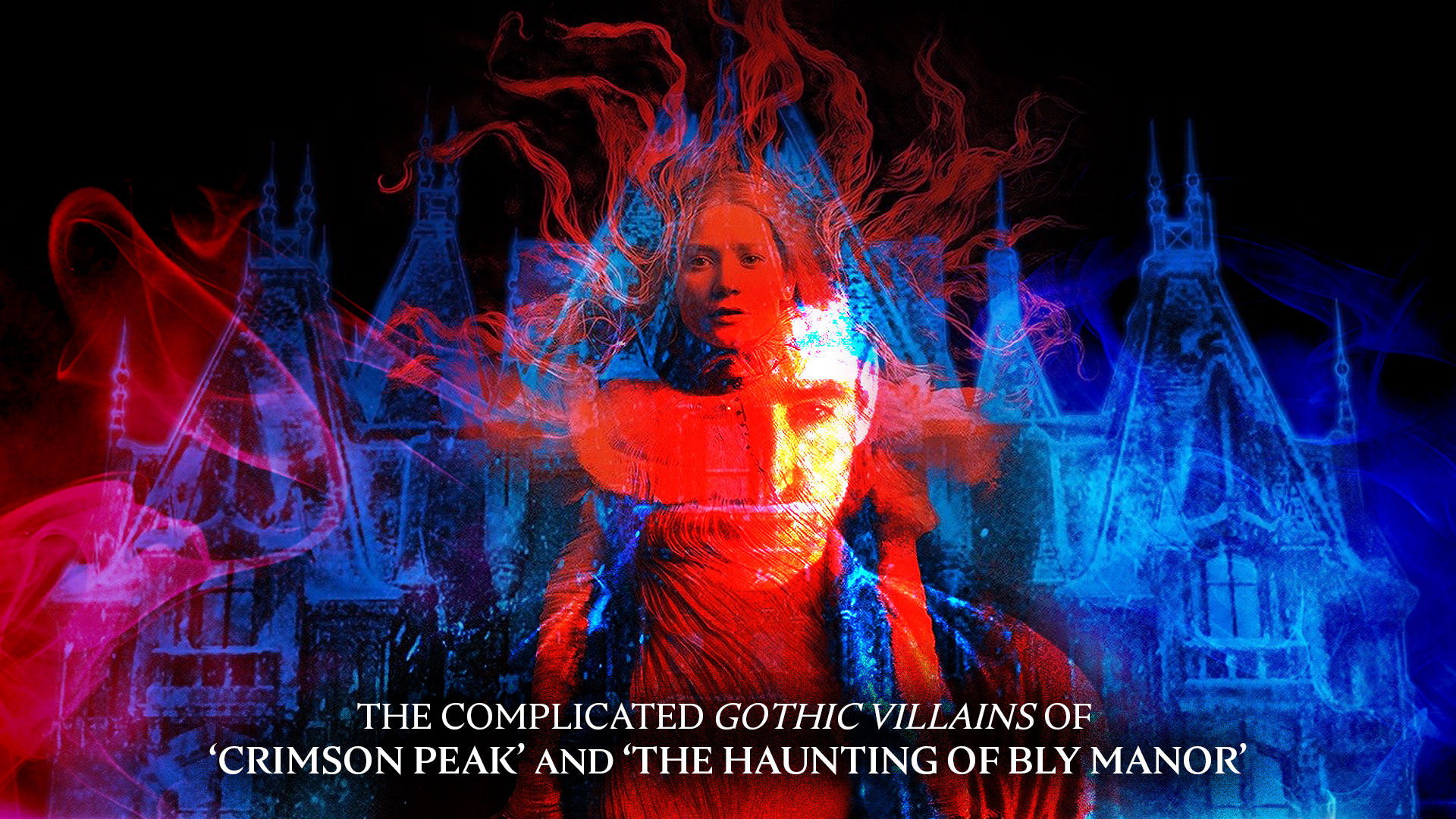 Gothic horror is largely misunderstood by modern audiences. The lukewarm reviews Crimson Peak garnered in 2015 are a good indication of that blind spot, as well as some misguided responses to Mike Flanagan’s series The Haunting of Bly Manor and how it showcases the tried and true facets of gothic horror. Crimson Peak and Bly Manor have more in common than being brilliant yet misconstrued gothic delights. These two horror tour de forces exhibit intelligent writing, acting, and direction when it comes to the creation and depiction of villains Lady Lucille Sharpe and Peter Quint, two characters that are very much two sides of the same coin. Crimson Peak and Bly Manor eschew shallow depictions to create raw emotional depth that allows the viewer to feel for their villains and understand their pain as well as reconcile that they are still villainous characters.

Home is where the horror always begins. To understand any character, the viewer must understand the background that they came from. It would be easy to assume that because Lady Lucille Sharpe comes from a family with a title and an estate that she would have led a charmed life and become a proper English lady. That’s not the case for Lucille. Her life was hardly one of frilly dresses and etiquette lessons. In her formative years, Lucille largely acted as a shield for her brother Thomas, trying desperately to protect him from their emotionally and physically abusive parents. With a brutish father and a cold mother, the Sharpe siblings had little chance at leading a normal life. When the Sharpes experienced monetary issues, Lucille was treated more like a servant than she was a daughter, having to tend to her cruel parents’ every whim. Lucille chose to bear the brunt of the pain and the abuse because she dearly loves her brother, the only person in the world she does trust. Thomas and Lucille’s abusive situation and isolation provided fertile ground for their unhealthy, codependent, and incestuous relationship to flourish. Lucille took it upon herself to end their suffering. She murdered their father by sporadically poisoning him with arsenic and their mother by lodging a butcher’s knife into her skull while she was bathing. As a result of her mother’s murder, Lucille was institutionalized and was only released into the care of her brother when he came of age.

The Haunting of Bly Manor’s version of Peter Quint comes from a similarly harrowing background. Throughout the series, Quint’s childhood and past are kept a secret except for a few stray references here and there until the terrifying reality of Quint’s origins is fully explored in episode seven, “The Two Faces, Part II.” In the third episode, “The Two Faces, Part I,” Quint alludes to his father and how he was a horrid parent, hinting that Quint suffered parental abuse. In “The Two Faces, Part II” the full depth of Quint’s abuse is revealed. Peter Quint was a victim of child sexual assault at the hands of his father. All the while, Peter’s mother knew and did nothing to protect Peter, making her complicit in her son’s assault. To make matters worse, after Quint manages to build a life for himself as an adult, his mother arrives demanding money from him. Peter’s covetousness of the Wingrave family’s possessions and the interactions between him and his mother hint that Peter comes from an impoverished background, adding another layer of understanding to his personality. All the while, Quint is downtrodden by rampant classism in addition to his trauma from being a sexual assault survivor. The inability to overcome a classist society and heal the wounds sustained from his abusive childhood has left Peter Quint defeated.

Crimson Peak and Bly Manor subtly comment on cycles of violence and how the abused can become the abuser. Lucille becomes a serial murderer, desperately clinging to the secluded lifestyle she grew accustomed to as a child with her brother. Thomas marries rich and lonely women, while Lucille carries out the murders so they can secure money to aid in the restoration of Crimson Peak and to fund Thomas’s inventions for mining the clay beneath the estate. She’s an extremely possessive and jealous person. Her romantic love for her brother drives her to commit terrifying acts, and she becomes increasingly unhinged as she begins to suspect her brother genuinely loves his newest bride, Edith. There is only one person that Thomas is allowed to love and that is Lucille.

Peter Quint is equally possessive and jealous as Lucille Sharpe. When Henry Wingrave’s newly hired au pair, Rebecca Jessel, catches his eye, the young woman’s fate is duly sealed. Peter charms Rebecca easily because Peter is almost impossible not to be taken with. On the surface, he seems like another intelligent and handsome man with immense wit and charisma. Rebecca and Peter embark on a torrid love affair that soon sours when he becomes jealous of Rebecca’s interactions with her fellow employee at Bly, Owen Sharma. Peter berates Rebecca and gaslights her, making her believe she did something wrong before leaving on bad terms. When Peter returns, he tries to make nice with her, like the incident never happened, and she gives in to him. The two then make plans to run away together to America, though Rebecca doesn’t know that, in order to do so, Peter has stolen money from Henry.

One keen parallel between Peter and Lucille, one that is intrinsically tied to their own fatal flaws, is that they quite literally love their partners to death. Love and toxicity go hand in hand for Peter and Lucille, as well as the concepts of love and death and pain. The tenets of love are wholly inextricable from pain, and their perceptions of romantic love are completely warped by their pasts. Jealousy and possessiveness fester within them. This very jealousy and possessiveness eventually drive Lucille to kill Thomas in a fit of rage at the idea of having to share him with Edith. While Lucille is horrified at what she’s done, the concept of having to share Thomas with anyone was too great for her already extremely fragile psyche to overcome. It would be easier for her for Thomas to be dead, a ghost, possibly damned to walk the halls of Crimson Peak forever instead of living a life where she wasn’t solely the love of his.

Peter, after being killed by the Lady of the Lake, becomes one of the ghosts of Bly before he is able to abscond with Rebecca and the stolen money to America. Peter, like Lucille, doesn’t want to be alone and has the need to possess Rebecca in multiple senses of the word. Peter takes advantage of her earnest love of him, and eventually, she willingly lets him take over her body after accidentally discovering that Peter has the ability to possess the living. The idea of possession becomes both literal and figurative. Peter possesses Rebecca, and in turn, he betrays her blind trust in him when he murders her by drowning while in control of her body. Like Lucille, Peter doesn’t want to be alone and is willing to go to horrific lengths to keep his beloved with him, even if it means taking her life and consigning her to the same fate as him. Lucille and Peter are passionate but suffocating in their love. They are able to rationalize all the atrocities that they commit as being justifiable because they were for love. In their cases, love fails to cover a multitude of sins because they have actively taken part in destroying their lovers.

While their characters are certainly villainous, they’re afforded a sense of humanity, and the viewer is given a chance to understand them. A mark of exceptional storytelling is creating villains that are not cliched or one-dimensional; it is creating villains that are human. Lucille and Peter’s entire portrayals are grounded deeply in the fact that while they are people who have committed heinous acts and have moral shortcomings, they are above all traumatized and broken people. They embody the idea that hurt people do indeed go on to hurt other people. One of the most impressive traits of their characters and their narratives is that, while the audience learns about them and feels for them, their actions are never excused. The respective creative teams  — actors, writers, and directors — aren’t afraid to take the viewer to those uncomfortable places that allow them to empathize with the villain and to understand why they became the person they are. There’s no need for a last-minute redemption arc or some sad attempt to make justifications for what they have done. They are allowed to exist as they are; broken people who break people. The compassionate writing for the characters is not for the sake of defense but for the sake of realism. They can be both victim and victimizer, both good and bad, both attractive and repulsive, both intelligent and depraved. They inhabit a gray area in life that is often oversimplified in fiction. A person can be extremely paradoxical, they can contain multitudes of contradictory facets that are all real and valid. Peter and Lucille are given the space to be nuanced and are provided understanding. People are never wholly one trait or another.

The subgenre of gothic horror is a perfect space to explore characters that encapsulate many contradictory traits in a villainous role. It is heavily rooted in emotion, in feeling deeply, and often in melodrama. Sensationalism gives way to realism in the cases of Crimson Peak and Bly Manor. There are ghosts and often bombastic situations, but the characters have a relatable quality. The narratives give way to a greater understanding of the human conditions and how hurt can fester and twist a person in unimaginable ways. Lucille and Peter’s characters are grounded in trauma, real-world tragic events that change people on fundamental levels. Strip away the gothic elements and the tragedy, and the complicated people that were created as a result of the tragedies remain. The fact the gothic is heavily invested in the emotional value of storytelling creates a perfect environment to create an authentic and empathetic experience for the viewer built around brilliantly delineated villains.

The parallelism that exists in the characters of Peter and Lucille is astonishing and the emotionality of the gothic horror subgenre gives them the chance to be villainous and tragic. They are characters who entice the mind and awaken the soul. They have rightfully earned spots as some of the best horror villains in the past decade, even though they’ve failed to garner the respect and recognition they deserve. The creatives behind Peter and Lucille provide the audience with an exercise in empathy and understanding and create one of the richest viewing experiences that fans will turn to for thoughtful entertainment and aspiring creatives will turn to for artful inspiration. It may take a while for gothic horror to catch on in this day and age, but luckily, there are those still dedicated to keeping it alive while creating extremely nuanced and devastatingly wonderful villains.