The Horror of the Artist in ‘The Hour of the Wolf’ 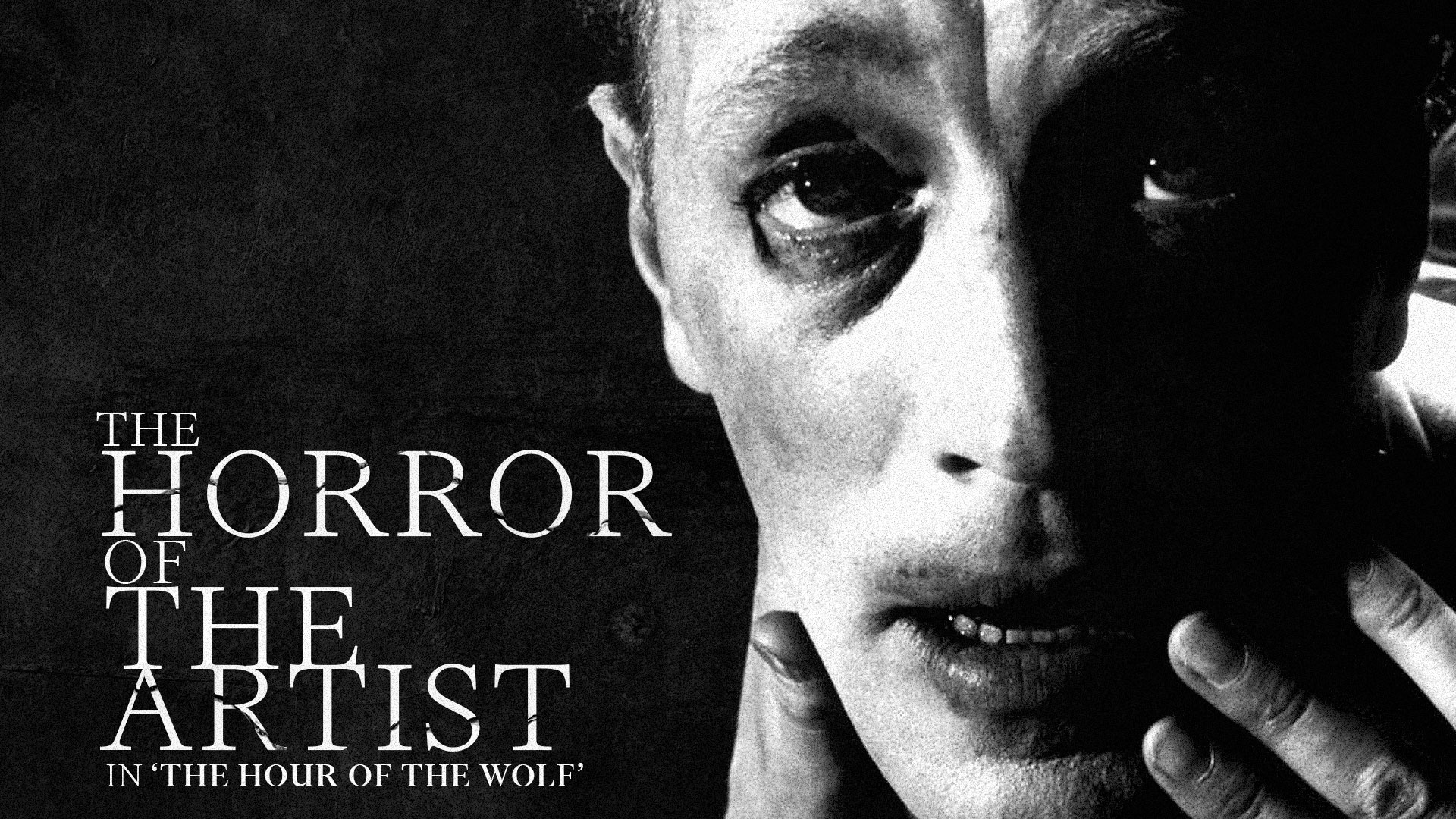 "The old ones called it "the hour of the wolf." It is the hour when most people die when most children are born. Now is when nightmares come to us. And if we are awake… We're afraid."

Arguably the most significant trend of the last decade in horror is the explosion of art-house horror films. They still belong to the horror genre but do not attempt to appeal to a broad audience and take a more restrained and psychological approach to scare their audiences. Filmmakers like Ari Aster, Robert Eggers, Jennifer Kent, David Robert Mitchell, Nicolas Winding Refn, and Alex Garland are all forebearers of this new wave of art-house horror. Proudly expressionistic and far more interested in atmosphere than jump scares, their films—and the types of films that studios like A24 and Neon have championed—have skyrocketed in popularity. This has resulted in a new wave of critical academic interest in the genre that has long been a pariah among the film community. However, these kinds of horror films are far from new. They have existed for decades.

Cinema is cyclical by nature. Artists are formed by their influences, continually growing and evolving how they express themselves and understand the art form through the lens of what inspires them. For this reason, one of the most exciting things you can do is explore the influences of the artists you love is to see what made them who they are. One of the most influential art-house filmmakers is Ingmar Bergman, the renowned and deeply existential Swedish filmmaker.

He is of particular influence to filmmakers like Eggers and Aster. They did an entire episode of the A24 Podcast dedicated to Bergman's career and his impact on their perspectives as directors. Bergman's influence on their cinema style is evident: his films are atmospheric and brooding, attempting to tap into something more profound—and darker—about human nature. They blend genre on a whim, spinning from dark comedy to melodrama to horror at a moment's notice. Considering Bergman's influence on the sub-genre, it is especially interesting to look back and analyze Bergman's only true dabbling in the horror genre: 1968's Hour of the Wolf.

Hour of the Wolf tells the story of a married couple, Johan (Max Von Sydow) and Alma (Liv Ullmann). Johan is an artist, and the two have retreated to their vacation home on a remote island so that Johan can focus on his work. While there, Alma becomes concerned as Johan becomes more detached and isolated, and as they receive out-of-nowhere visits from strangers who have a strange amount of knowledge of the couple. Out of concern, she reads his journal to discover hallucinations and visions more horrifying than she could imagine. The island's other inhabitants, a formerly wealthy family that owns the castle on the other side of the island, invite Alma and Johan to dinner at the estate. They confess they are massive fans of Johan's work, and the conversation inflates his ego to dangerous levels while also driving a wedge between him and Alma. In the days after the dinner, Johan's loose grip on his sanity slips away as the film becomes more and more nightmarish, and the repressed desires and depravity of Johan are released.

The horror of Hour of the Wolf is firmly in the art-house camp. While there are several jump scares, the film derives its horror from nightmarish imagery, a pervasive sense of dread, and an uncomfortably macabre atmosphere. The film begins with a title card explaining that the work is a recreation of Johan's disappearance, based on Alma's testimony and Johan's journal entries. Over the opening credits, we hear the sounds of a film set, the hammering of construction equipment, the crew's chattering, and the director shouting orders. From the very beginning, the film breaks the fourth wall while also reinforcing the story's fatalism. We know the ending, Johan disappears. There is no changing that fact, and it lends a sense of fatalism to the whole affair. Like a Greek tragedy, these events are fated and determined as Johan succumbs to his own psychological, or literal, demons.

Like many art-house films, much of the atmosphere and tension in Hour of the Wolf comes from its cinematography. Shot by Bergman's longtime cinematographer Sven Nykvist, the film is claustrophobic and oppressive. Many of the film's scenes are captured in just a handful of shots, shifting from a long shot to a series of oppressive close-ups with quick whip pans, shifting perspective like an omniscient observer watching the disturbing events unfold. Yet remarkably, every single composition within the lengthy shots is painterly in its design. The use of negative space and deep shadows makes every image frightening, uncomfortable, and gorgeous to watch.

The film maintains an anxious sense of energy, shifting the focus from character to character without interrupting the scene's flow. The film lacks a soundtrack until the third act when we change to Johan's perspective, letting every creaking floorboard and gust of wind provide the ambiance. Simultaneously, conversations' overlapping noise builds an overwhelming sense of anxiety, a technique utilized by other talented directors like Robert Altman and the Safdie Brothers.

Sydow's performance is anxious and brooding, clearly so preoccupied with his struggles that he ignores the stable life right in front of him. This facade of disinterest cracks as the film goes on, as he becomes more expressive and animated as he goes down the rabbit hole of his desires. This depiction is remarkably self-critical for Bergman, given the amount of himself he puts into the character. While charming and witty, he is also unlikable. The core of the movie's empathy is Alma, who is portrayed with interiority and compassion by Ullmann. Though Alma is a woman of few words, thanks to her brilliant and expressive performance, we are always in full understanding of her character's state of mind.

The source of so much of the tension and anxiety is the horror of being an artist. Bergman is no stranger to self-inserting in his work, but much of this particular film feels like a glimpse inside his mind and insecurities. The rockiness of Johan and Alma's relationship particularly feels plucked from Bergman's mind. Bergman had married five separate times himself and had romantic relationships with several actresses he frequently collaborated with, including the film's star Liv Ullmann. Showing remarkable self-awareness, Bergman not only self-inserts his struggles into the narrative, but he makes himself the antagonist.

This is all because of how Bergman frames the film by making Alma the protagonist and the audience's sole POV for most of the runtime. We see the world through her eyes, and the only times we stray from her point of view are nightmarish, dream-like recreations of Johan's journal entries as Alma reads them. Bergman created a film about his struggles in his interpersonal relationships and becoming consumed by his art and personal demons, but made it for his partners who he had failed.

We only glimpse the world through Johan's eyes after his fate is sealed. As the film swings into its third act, Johan makes his choice between his obsession and his love, choosing to double down on his creative endeavors and feed his demons. Once he violently abandons Alma, we see him return to the castle and see his adoring fans' reality and his creative process for what it is, a grotesque and macabre carnival of horrors. He goes from one disturbing room after another in a quest for his former mistress Veronika Vogler, whom he still lusts after. Johan's egoism, lust, and self-obsession culminate in the end with a scene that intertwines creation, sexuality, and self-destruction.

As Bergman himself put it in his autobiography Images: My Life in Film:

"Then the fatal weapon is put between them, and Johan makes his choice. He chooses the dream of the demons instead of the palpable reality of Alma. Here I was setting forth on a problematic path that can ultimately be reached only through poetry or music… There is no doubt that my upbringing was a fertile ground for the demons of neurosis."

After witnessing how far Johan goes and the depths of his humiliation, we switch back to Alma's perspective, only to witness the destruction again from her perspective. It is fatalistic and disturbing to see the real-time destruction of a relationship and someone's consumption by their demons both from their perspective and the POV of their lover who watches along, unable to help.

The art-house approach to the film not only applies to its approach to horror and the way Bergman uses the narrative to explore his demons but also in how the film approaches its symbolism. It leaves the exact meaning of its monsters up for interpretation. In some ways, it represents the toxicity of an artist's relationship to their fans and how those fans can feed into the cycle of ego and destruction inherent to creation. They also can represent the draw of art and how it pulled Bergman away from his own families and relationships. Then there is the mental illness angle, given Bergman's own struggle with depression and anxiety.

The parallels between Hour of the Wolf and modern art-house horror are easy to see. Bergman's approach to tone and craft is an apparent influence on modern horror icons such as Ari Aster and Robert Eggers. Bergman's horror is cerebral and self-reflexive, concerned with the nature of self and how we relate to others. His films are prone to melodrama, utilizing a twisted sense of humor and irony to enhance the character's terror. His movies are dream-like, favoring using dream logic to create an overwhelming sense of dread over any formal plotting. For a careful viewer, the connections between Hour of the Wolf and modern films are explicit. Hour of the Wolf is almost a cinematic blueprint. From the way that Hereditary utilizes a framing device to enforce a sense of fatalism and tragic determinism, to The Babadook’s horror-as-psychological metaphor approach, to even the use of dream logic juxtaposed with nightmarish imagery and the disintegration of self in The Lighthouse.

Hour of the Wolf is a cornerstone of horror history, remarkably influential to the most affecting horror of our times, and a profoundly chilling and disturbing film in its own right. For fans of the genre, it is worthwhile and compelling viewing for both reasons. While clearly of its time and a limited budget, the suffocating atmosphere Bergman conjures and the wounded and vulnerable performances of his two leads and frequent collaborators rival anything that modern horror has conjured. The images he captures and how he lays out his insecurities, failures, and the inner battle over his relationship to his art are a testament to cinema's power to explore the darker side of all of us.